The one true God, through His son Jesus Christ, has not only blessed us with the gift of salvation and forgiveness of all our sins, He has given us spiritual gifts. Since the fall of man, as described in Genesis, those gifts have been counterfeited by satan.

One of the fruits of Adam’s sin was that we would know both good and evil, and have access to both spirit realms.  This has caused unredeemed mankind to seek information and help from demonic spirits when they should seek it only from God’s Holy Spirit.      Genesis 3:5

The angel Lucifer fell from heaven because he wanted people to come to him as their source.  He still desires worship and so because we are spiritual people, we can be drawn by him to seek information through the wrong supernatural means.                               Isaiah 14:12

He uses deception as one of his main tactics, and counterfeits everything that we have been given by the one true God.

Practitioners of modern day therapies, which will be discussed in this manual, may or may not be aware of the origins of their therapy.  Their intentions are usually to help and heal people, and there are often positive results from what they do. This does not, however, change the fact that the founders of many therapies were directly involved in the occult and many were directly connected to religions which worship demonic gods.

Because of the original foundations of these therapies, spiritual permission was given and doors were opened for demonic spirits to transfer from historical origins into current therapies, and to have doorways opened into the lives of those who take part, either as a practitioner or as a recipient.

When we take part in these therapies, we acknowledge their spiritual authority. And when we pay people to administer them, we honour them and thus open ourselves to any demonic spirits attached to the people or their therapy.

It is important for us to be very careful who we allow to speak into our lives or lay hands upon us. Spirits and spiritual gifts can be transferred through physical contact and we can become contaminated by them.

The Bible tells us to lay hands upon those we pray for to release healing, acknowledging the power of transference through the laying on of hands.  Matthew 16:18, 1 Timothy 4:14 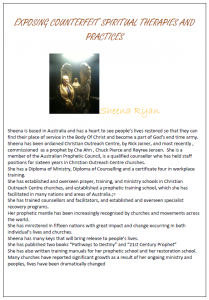